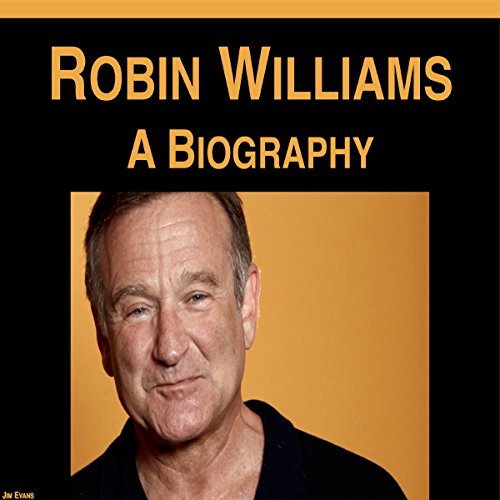 By: Jim Evans
Narrated by: Chris Abernathy
Try for £0.00

Robin Williams was an American actor and comedian. Starting as a stand-up comedian in San Francisco and Los Angeles in the mid-1970s, he is credited with leading San Francisco's comedy renaissance. After rising to fame as Mork in the sitcom Mork & Mindy (1978-82), he went on to establish a career in both stand-up comedy and feature film acting. He was known for his improvisational skills.

After his film debut in the musical comedy Popeye (1980), he starred or co-starred in widely acclaimed films, including the comedy-drama The World According to Garp (1982), war comedy Good Morning, Vietnam (1987), dramas Dead Poets Society (1989) and Awakenings (1990), comedy-drama The Fisher King (1991), the animated musical-fantasy Aladdin (1992), drama Good Will Hunting (1997), and psychological thriller One Hour Photo (2002), as well as financial successes such as the fantasy adventure film Hook (1991), comedy Mrs. Doubtfire (1993), fantasy adventure Jumanji (1995), comedy The Birdcage (1996), and the Night at the Museum trilogy.

In 1998, Williams won the Academy Award for Best Supporting Actor for his performance as Dr. Sean Maguire in Good Will Hunting. In addition, Williams was nominated thrice in the Best Actor for his performances in Good Morning, Vietnam, Dead Poets Society, and The Fisher King. He also received two Primetime Emmy Awards, six Golden Globe Awards, two Screen Actors Guild Awards, and four Grammy Awards throughout his career, and was inducted as a Disney Legend in 2009.

What listeners say about Robin Williams: A Biography

Wat too short of a story

Far too short of a story to be called a biography of Robin Williams. What was in this audio is about the same things I had read in the first few minutes of doing a little research on Robin. Very disappointing to have to pay to hear about the same I already knew about him.

This really doesn't tell you anything new about Robin Williams. Way too short and brief to spend money on. It said unabridged, but that is hard to imagine.

This should not be advertised as a biography. Nothing new here. Don't waste the money

could be an introduction. much too short for book

too short for biography.
didn't include anything except what could be read on Wikipedia.
ask author for 20 more chapters