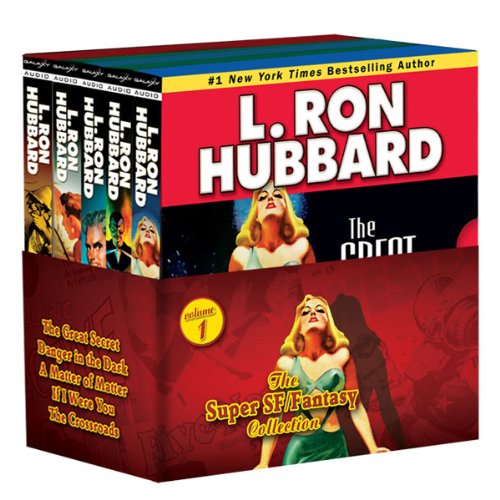 Experience the adventures in this new audio collection by L. Ron Hubbard. Included are: The Great Secret , A Matter of Matter, If I Were You, Danger in the Dark and The Crossroads.

The Great Secret
Fanner Marston was raised a slave as a child, became a petty street thief as a teen, and now masters his own craft and crew as a grown man. He's also gone completely mad. Driven by privation, with a vicious greed and slavering lust for power, Marston survives a perilous trek through a blistering desert to a magical where legend says a secret awaits that will give him control over the universe.

A Matter of Matter
Chuck Lambert is taken advantage of by an unsavory real-estate swindler from a galactic economy that sells unwary customers like him a planet on which they can't sit down - because there's something the matter with its matter.

If I Were You
Circus dwarf Little Tom Little is the king of midgets, loved by crowds and carnival folk alike. Only he doesn't just want to be a bigger circus star, he wants to be just like the tall and imposing circus leader. Trouble begins the moment that a set of ancient books containing the secret of switching bodies finds its way into Tom Little's tiny hands.

Danger in the Dark
After Billy Newman strikes gold while mining in the Philippines, he believes Lady Luck favors him so much that he buys his own South Seas island for a bargain price . . . or so he thinks. But when the natives fall ill from plague and crops start failing, the tribal chiefs blame Billy for angering the local god Tadamona.

The Crossroads
Farmer Eben Smith heads off to the big city to trade his wagonload of produce. But he barters a lot more than goods after he stumbles across a strange crossroads in time, bargains with different cultures in alternate realities, and accidentally wreaks havoc and chaos in each.

"Hubbard's classic pulp fiction tale was originally published in 1943 but shows no signs of age....This multicast performance, headed by Bruce Boxleitner, is a wonderfully rich and textured experience, complete with realistic sound effects and moody atmospheric score. Also included are three shorter science-fiction tales, each as entertaining as the last." (Publishers Weekly)
"The fascinating thing to me is that L. Ron Hubbard's fantasy stories, first published 50 and 60 years ago, are not dated in style, content or language. They are as fresh and interesting for times right now as they were when he conceived them." (Anne McCaffrey)
"A master of the fast-action short story." (Robert A. Heinlein)

What did you love best about Super Sci-Fi Fantasy Collection?

I loved the stories, I can see where Robert A. Heinlien, learned how to write this stuff!

Great Science fiction, from a guy who was beyond mastery, I don't know very much about Scientolgy, but this work is first rate, as good as Robert E. Howard, in language and scope of wonderful ideas! No way is it dated! Just Great!

What does the narrators bring to the story that you wouldn’t experience if you just read the book?

If you could take any character from Super Sci-Fi Fantasy Collection out to dinner, who would it be and why?