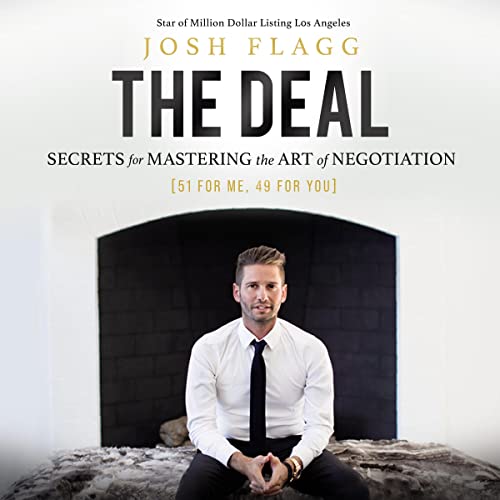 By: Josh Flagg
Narrated by: Whitney Stuart
Pre-order: Try for £0.00

Star of the hit show Million Dollar Listing Los Angeles, Josh Flagg has mastered the ability to negotiate the largest deals in real estate. Now, he’s ready to share his secrets to mastering any negotiation in any industry and at any level. This is The Art of the Deal for today’s negotiators.

Josh Flagg began his real estate career as a student at Beverly Hills High School. He swung big and hit, landing him in the perfect position to take on some of LA’s largest, most exclusive real estate listings and, eventually, a spot on Million Dollar Listing Los Angeles. Since then, his career has grown over nine seasons on the hit Bravo show.

Along the way, he has faced off with negotiators of all kinds in deals over the world’s most expensive and sought-after real estate. He has seen and put into practice what works and what doesn’t. Josh has curated 10 rules that, when applied to any deal, will significantly increase any your chance of success and make you the master negotiator your clients need you to be.

What listeners say about The Deal