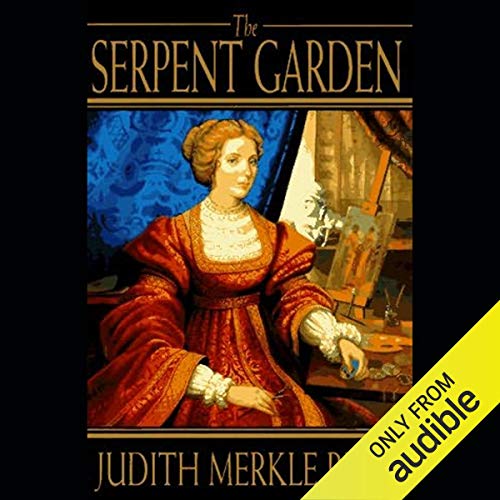 By: Judith Merkle Riley
Narrated by: Alison Larkin
Try for £0.00

In the court of Henry VIII, there are many secrets - and some people will kill to keep them hidden.

Susanna Dallet is the daughter of a Flemish painter and wife to a philandering husband, living in the court of Henry VIII. When her husband is murdered, Susanna is suddenly left with a household to provide for and nothing to her name. Her days of anonymity are over when Susanna finds that guild rules preventing women from working do not apply at the king’s court, and she manages to secure a position as a miniature-portrait painter. Before long, she has not only made a name for herself, she is close to those who surround Princess Mary. But even in this lofty company, Susanna is not safe. An old manuscript that she has inherited turns out to hold the keys to an age-old mystery, and the forces that claimed her husband are closing in. As danger looms, Susanna joins with Robert Ashton, secretary to Henry’s cunning and ruthless adviser Archbishop Wolsey, and together they must fight a fearsome society in league with a demon.

Combining heartpounding action, sly humor, romance, and supernatural twists, The Serpent Garden is the story of a creative and resourceful woman who unwittingly finds herself in a dangerous - and deadly - game of hide-and-seek.

What listeners say about The Serpent Garden

exceptionally good narrator. and every story by Judith Merkle Riley is a joy, I love the humour and wit of her heroines

I read this book years ago and loved it. The audio version is quite impressive. The narrator keeps the characters interesting adding a lot of nuance to the plot. The period is kept accurate with the conspiracy references and the Priory of Sion. The characters display attitudes that seem to be consistent with what is known about that age. Altogether I give this a very high recommendation

Is there anything you would change about this book?

I think there's a good story in there someplace but I couldn't get past the narrator's too high and irritating voice. Plus, after several starts and stops, I just couldn't get "engaged" in this story. I still don't know what it is about. After about 3 hours, I just threw in the towel. The glowing reviews for this book come from READERS, not LISTENERS, which is misleading since I am an Audible customer.

How would you have changed the story to make it more enjoyable?

A much better narrator. While Alison Larkin is not a totally crappy, she just wasn't right for this book.

Would you be willing to try another one of Alison Larkin’s performances?

Yes, I think it was a "perfect storm" of issues which brought the whole work down.

If this book were a movie would you go see it?

This book is barely BOOK material - I cannot see it being made into a feature film, unless it was a Netflix movie or straight-to-DVD one.

I was the first Audible.com listener to review this book. I bought it based on the reviews but noticed too late that they were all from Amazon.com buyers. I find this very unfair to listeners of books. Narration, production and various other features are critical in an audiobook but are not important in the print version. I don't like the way Audible merges the different web site reviews when they are so very different. It is almost like "bait & switch" if one doesn't pay attention. I gave this book several chances to "come alive" but it only fell flat. REFUND!

I love the historical setting, the weaving of the profane, diabolical and divine, the love story but the constant chattering of Sussana gets a little annoying.