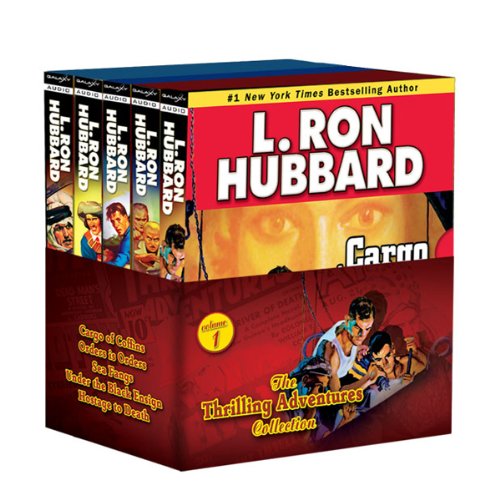 Experience the thrilling adventures in this audio collection by L. Ron Hubbard. Included are: Cargo of Coffins, Orders is Orders, Sea Fangs, Under the Black Ensign, and Hostage to Death.

Cargo of Coffins
He was the last man Lars Marlin had expected to see in Rio de Janeiro - and it took all of his willpower not to slay him on the spot. Paco Corvino was a smooth-talking and slippery con man, a contraband runner, and escaped convict...not to mention murderer.

Orders is Orders
The Japanese have led a heavily armored assault against the Chinese city of Shunkien, pounding wreckage into ashes and wiping out a city dating back to Genghis Kahn. One of the few buildings still standing is the small American consulate, now packed with one hundred and sixteen frightened American refugees.

Sea Fangs
In an attempt to reclaim his stolen oil fields, Bob Sherman secretly hires on as a deckhand aboard the yacht of Herbert Marmion, the man who ruthlessly stole them. When a hurricane sends the yacht to an uncharted island, the entire crew is captured by pirates - including Marmion's beautiful daughter.

Under the Black Ensign
Tom Bristol's career a first mate abruptly ends during shore leave when he is press-ganged into serving aboard the British HMS Terror. Toiling under the cruel whip of England is merciless as crew members are treated as little more than chattel. Fate finally smiles on Bristol when the vessel is overtaken by pirates and he turns coat and joins them.

Hostage to Death
Legionnaire Bill Reilly was given specific orders to guard a railroad station where nightly trains carrying Spanish supplies and troops pass by. He would have done so had it not been for a severed hand that arrived in his camp.

"Two escaped convicts, Paco Corvino and Lars Marlin, face off in Hubbard's fast-paced high-seas action yarn, first published in the November 1937 issue of Argosy....Contraband cargo (heroin) and the yacht owner's beautiful daughter add spice to this taut pulp melodrama." (Publishers Weekly)
"A master of adventure." (Anne McCaffrey)
"This is a gem in American pulp fiction, in all its campy glory. The full-cast performance, complete with sound effects, only enhances its appeal." (AudioFile)

Bombastic and leaves a strange taste in your mouth

Imagine a more misogynistic Indiana Jones but without any miseries.
Gave one story a try. Was hard to finish.
Legionary stories in Maroc. Alpha male gets hundreds killed for damsel, damsel falls in love and follows the dishonored male on path to redemption.