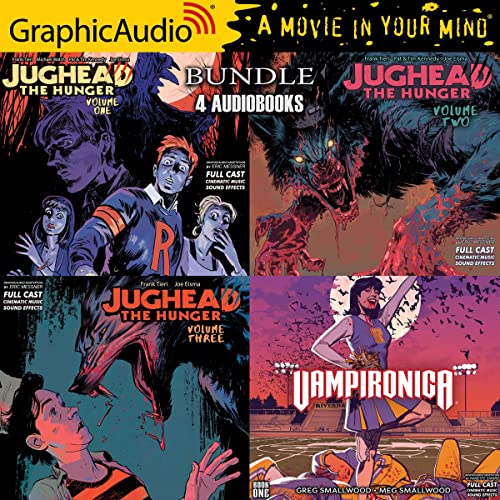 Jughead Jones has always had an insatiable appetite... but what if his hunger came from a sinister place? When a murderous menace is on the prowl, taking the lives of some of the most well-known and esteemed inhabitants of Riverdale, Jughead and his family's dark legacy comes to light.

Veronica Lodge, a cheerleader at Riverdale Senior High who becomes a strigoi or a vampiress after being bitten by Ivan, a blood sucker, hundreds of years her senior. Forced to contend with this new, radical transformation, Veronica must deal with the prospect of feeding on her own small-town cohorts. She protects the people of Riverdale from other vampires as she attempts to break the curse on her and the other victims by destroying the master vampire.

Adapted from the issues and produced with a full cast of actors, immersive sound effects and cinematic music!

I listened to all the other Archie/Riverdale titles that have been adapted to audiobook so I decided to give this one a try. The Jughead one is ok and just ends on a cliffhanger. There’s another Jughead werewolf book that is better and I would recommend over this one. That’s very odd for me to say because I have never recommended any other version over a GraphicAudio adaptation before. The Veronica book is a fun listen and worth your time.