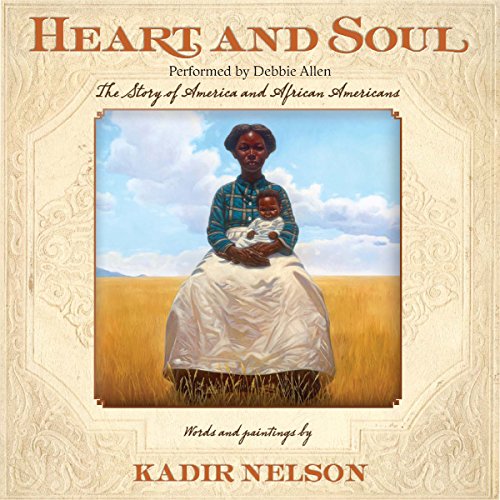 By: Kadir Nelson
Narrated by: Debbie Allen
Try for £0.00

The story of America and African Americans is a story of hope and inspiration and unwavering courage. But it is also the story of injustice; of a country divided by law, education, and wealth; of a people whose struggles and achievements helped define their country.

Kadir Nelson, one of this generation's most accomplished, award-winning artists, has created an epic yet intimate introduction to the history of America and African Americans, from colonial days through the civil rights movement. Written in the voice of an "Everywoman," an unnamed narrator whose forebears came to this country on slave ships and who lived to cast her vote for the first African American president, Heart and Soul touches on some of the great transformative events and small victories of that history. This inspiring book demonstrates that in gaining their freedom and equal rights, African Americans helped our country achieve its promise of liberty and justice - the true heart and soul of our nation.

What listeners say about Heart and Soul

After reading The Help I began to wish I had known more about black history especially in relation to racism in the American south before listening to it. Low and behold this audio book turned up to provide just that. I found it extremely informative whilst not bogging you down with dates and facts, this meant that it was easy to listen to and take in. The narrators personal touches and passion shone through illustrating the tragic and triumphant facts and stories beautifully. I now feel more informed about such an important part of our history and have a better understanding of the other audio books I enjoy listening to. Well worth a listen.

I am new to Kadir Nelson but I find that I love his artistry and words. I was moved by Heart and Soul. His presented words flowed off the page and rested in my heart with such a flourish that I thought I was hearing my own story. This volume is suitable for all the family. Debbie Allen's voice talent lent its raspy and velvety tones to the story. I was refreshingly moved by this volume. Three cheers to this formidable artist. Listen with passion. All I can say is that it was enthralling and immensely rich.

Would you recommend this audiobook to a friend? If so, why?

What was one of the most memorable moments of Heart and Soul?

made me realize how little I know and nee.d to check on

Kadir used family experiences. to make it real. The reader was wonderful. You must see the book to be really touched.

If you were to make a film of this book, what would the tag line be?

Black experience told passionately and made real for all. Exceptional!

This audio and book experience should be a MUST for children and adults. The pictures are awesome. Get it, Enjoy!

What did you love best about Heart and Soul?

Kadir Nelson is best known for his beautiful, stunning paintings, but this narrative is wonderful. This history of America is told from the point of view of an African American grandmother telling the story of her country and her people. Debbie Allen brings this to life, just as Kadir's paintings do. The words, the tone, the spirit soar. Wonderful for family listening - absolutely inspiring and heartfelt.

What other book might you compare Heart and Soul to and why?

The tone and spirit of Debbie Allen's narration reminded me of listening to Lynne Thigpen narrate The Autobiography of Miss Jane Pittman, by Ernest Gaines.

We listened to this with our kids ages 9 and 7 and we all enjoyed it thoroughly!!

Listened a little at a time to enjoy. lives the narrator, brought to life.

I had purchased this book about a year ago, I'm glad I got to finally finished it. I'd laughed and cried, and got mad nevertheless I know that is our country's violent history. Change is still coming we as a people will never stop fighting for our freedom.

This story and the art that accompanies it is inspiring. I enjoyed this as much or more than my children. We have the physical book and the artwork is breathtaking but as a white parent of white children I felt it important to also have the audible version. I wanted my children to hear these stories of struggle and strength spoken by someone who has personal experience dealing with struggle and strength because of race.

If I could, I’d rate 10 ⭐️ for performance! Listened to this with my children, ages 12 and 10. Had them entranced!