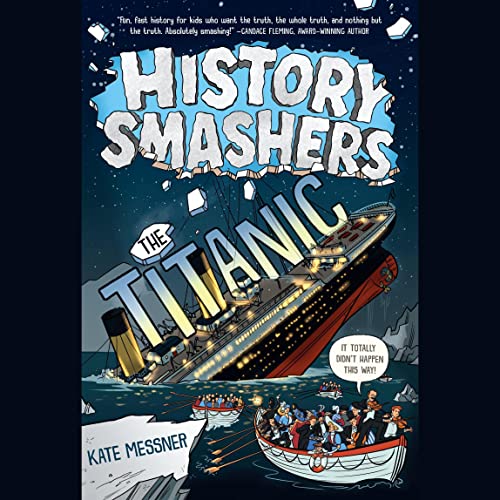 By: Kate Messner
Narrated by: Debi Tinsley
Try for £0.00

Myths! Lies! Secrets! Uncover the hidden truth behind the sinking of the Titanic with beloved educator/author Kate Messner. Perfect for fans of I Survived! and Nathan Hale's Hazardous Tales.

On April 15, 1912 an "unsinkable" ship called the Titanic unexpectedly hit an iceberg and sank to the bottom of the North Atlantic. Right?

Wrong! Nobody was really talking about the Titanic being unsinkable until after it sank.

The truth is, four different ships wired the Titanic to report icebergs and field ice in the area. But the Titanic never slowed down. In fact, when the Californian warned that it was trapped in ice, the Titanic's wireless operator was so busy sending outgoing messages that he replied, "Shut up!" No joke.

Discover the nonfiction series that demolishes everything you thought you knew about history.

What listeners say about History Smashers: The Titanic