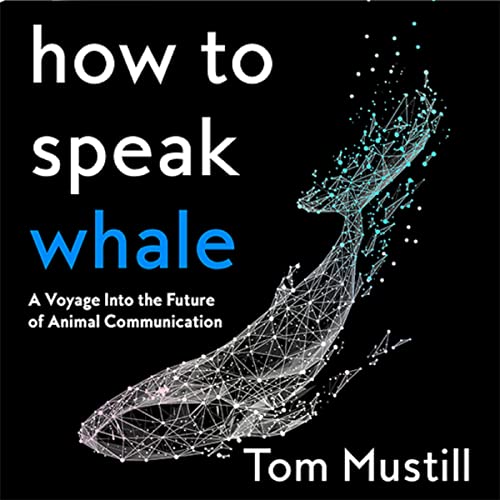 How to Speak Whale

By: Tom Mustill
Narrated by: Tom Mutsill
Pre-order: Try for £0.00

A thrilling investigation into whale science and animal communication, and a poignant look at how science may change our relationship with animals forever.

In 2015, wildlife filmmaker Tom Mustill was whale watching when a humpback breached onto his kayak and nearly killed him. A video clip of the event went viral, and Tom found himself inundated with theories about what happened. He became obsessed with trying to find out what the whale had been thinking. He wished he could just ask it. In the process of making a film about his experience, he discovered that might not be such a crazy idea.

Developments in natural science and AI mean that we are closer than ever to genuinely talking to animals. Scientists and start-ups across Silicon Valley and beyond are working to turn the fantasy of Dr Doolittle into a reality, using powerful new technologies to try to decode the languages of animals. Whales, with their giant mammalian brains and sophisticated languages, offer one of the most realistic opportunities for us to do so. But what would the consequences of such human-animal interaction be? We’d open a Pandora’s Box that could never be closed.

How to Speak Whale is a lively, wide-ranging investigation into animal communication that explores how close we truly are to communicating with another species, and—if we were to make meaningful contact—how it would impact the world we live in.

"Dr Doolittle wanted to speak to the animals, and many attempts to communicate with non-humans have involved trying to teach them to speak English. The frontier is in meeting other animals where they are, how they live, and for us to understand them by learning their modes of communication. In How to Speak Whale, Tom Mustill takes us farther, much farther, than Dr Doolittle ever imagined. And he does it with humility and sensitivity that befits the subject."
Carl Safina, New York Times-bestselling author of Song for the Blue Ocean and Beyond Words

"We are on the verge of a revolution in communicating with these smart, social, otherworldly leviathans. Tom Mustill's riveting reports from the cutting edge of science set my heart pounding! How to Speak Whale is one of the most exciting and hopeful books I have read in ages." Sy Montgomery, New York Times-bestselling author of The Soul of an Octopus

"Through his highly personal journey and discussions with experts, Tom Mustill conveys the richness of whale song and communication. Most of all we gain immense respect for these giants of the ocean." Frans de Waal, author of Different: Gender Through the Eyes of a Primatologist

What listeners say about How to Speak Whale