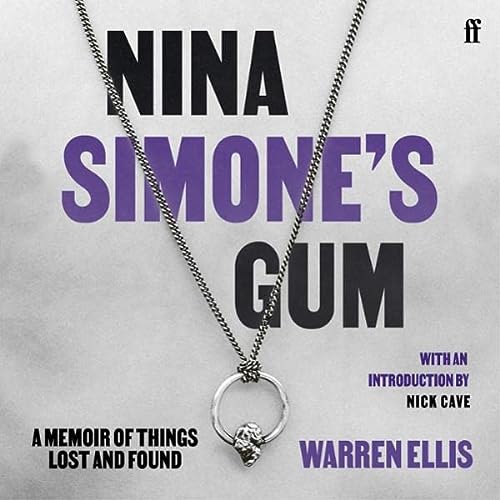 From award-winning musician and composer Warren Ellis comes the unexpected and inspiring story of a piece of chewing gum.

Featuring an introduction by Nick Cave.

I hadn't opened the towel that contained her gum since 2013. The last person to touch it was Nina Simone, her saliva and fingerprints unsullied. The idea that it was still in her towel was something I had drawn strength from. I thought each time I opened it some of Nina Simone's spirit would vanish. In many ways, that thought was more important than the gum itself.

On Thursday, 1st July, 1999, Dr Nina Simone gave a rare performance as part of Nick Cave's Meltdown Festival. After the show, in a state of awe, Warren Ellis crept onto the stage, took Dr Simone's piece of chewed gum from the piano, wrapped it in her stage towel and put it in a Tower Records bag. The gum remained with him for 20 years—a sacred totem, his creative muse, a conduit that would eventually take Ellis back to his childhood and his relationship with found objects, growing in significance with every passing year.

Nina Simone's Gum is about how something so small can form beautiful connections between people. It is a story about the meaning we place on things, on experiences and how they become imbued with spirituality. It is a celebration of artistic process, friendship, understanding and love.

"Warren has turned this memento, snatched from his idol's piano in a moment of rapture, into a genuine religious artefact." (Nick Cave)

"Such a mad, happy book about art and music and obsession. I'm so glad I got to read it. It made the world feel lighter." (Neil Gaiman)