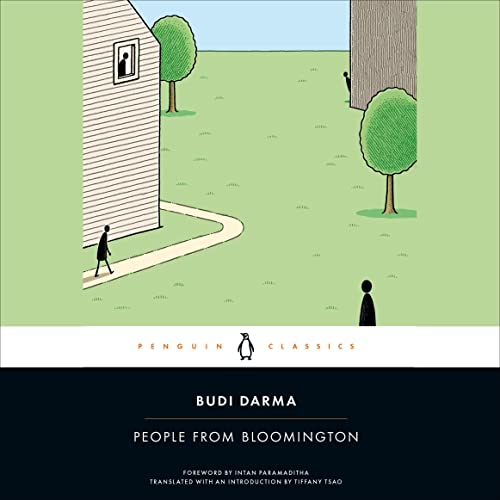 An eerie, alienating, yet comic and profoundly sympathetic short-story collection about Americans in America by one of Indonesia’s most prominent writers, now in an English translation for its 40th anniversary, with a foreword by Intan Paramaditha.

In these seven stories of The People from Bloomington our peculiar narrators find themselves in the most peculiar of circumstances and encounter the most peculiar of people. Set in Bloomington, Indiana, where the author lived as a graduate student in the 1970s, this is far from the idyllic portrait of small-town America. Rather, sectioned into apartment units and rented rooms, and gridded by long, empty streets and distances traversable only by car, it's a place where the solitary can all too easily remain solitary; where people can at once be obsessively curious about others, yet fail to form genuine connections with anyone. The characters feel their loneliness acutely and yet deliberately estrange others. Budi Darma paints a realist world portrayed through an absurdist frame, morbid and funny at the same time.

For decades, Budi Darma has influenced and inspired many writers, artists, filmmakers, and readers in Indonesia, yet his stories also transcend time and place. With The People from Bloomington, Budi Darma draws us to a universality recognized by audiences around the world - the cruelty of life and the difficulties that people face in relating to each other while negotiating their own identities. The stories are not about “strangeness” in the sense of culture, race, and nationality. Instead, they are a statement about how everyone, regardless of nationality or race, is strange and subject to the same tortures, suspicions, yearnings, and peculiarities of the mind.

What listeners say about People from Bloomington