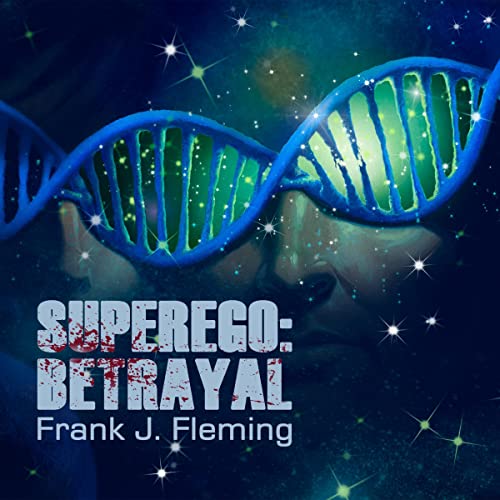 Terrorists. A ruthless criminal syndicate. A warmongering dictatorship. And those are just Rico’s allies.

With the civilized universe conquered, it’s up to the uncivilized to fight back. Rico prefers working alone, but this time, he’s leading an army against his two greatest enemies, who both have one thing in common: Rico’s own DNA.

Fighting a personal battle on a galactic scale, Rico enlists thieves, murderers, and malcontents (plus one space princess) to help him save the universe from tyranny.

And considering Rico’s new associates, it’s not a question of whether he’ll be betrayed, but when, and by whom.

What listeners say about Superego: Betrayal

I've walked miles and miles listening to Frank's books on audible. I've also folded laundry and cleaned out the garage. His SUPEREGO series has been a uniformly excellent, time-well-spent, no regret listen. BETRAYAL continues that trend.
Highly recommended.

This is just a joyride of an action sci-fi title. Tightly plotted with strong characters and excellent action sequences. You probably don't need to listen to first two books, but it wouldn't hurt. And the whole things ends with a moment that had me yelling at my phone. Perfect for a plane flight or a long drive.

Excellent performance by the two readers. I really enjoyed the dynamic they brought.

Long time Frank J fan. I read the first two books in this series, and it was an adjustment to switch to the audio version. The narrators did a good job of reading without emotion. The lack of emotion slowed my entry into the story as it was distracting at first. Once I realized that, I felt it added to the story experience.
As far as the story itself, the book continues with the twists and turns of galactic scale intrigues and wars. It took a while for the promised betrayals to start, but they delivered. A few twists I saw coming, but the ending I did not expect.

Disclaimer: I've been one of Frank J. Fleming's biggest fans - and not just in gross tonnage - for about two decades, going back to "Nuke the Moon". I mostly binge-listened over the past weekend.

He's taken a few big leaps in this book: the dual POV, the increased depth of characterization, and a plot that twists every few minutes chief among them. Artful cliffhanger to build anticipation for the final volume. Not quite as many laugh out loud moments as i would have expected though. Quite a few scenes have a noir feel to them.

He built suspense well about a couple of the implements of death - as to whether one irreplaceable weapon was misplaced and as to why a particular weapon only killed its target and not its user - and eventually resolved them.

Both narrators displayed great range and did a notable job at portraying highly disparate characters in memorable ways.

It's been a long time since I've been so thoroughly entertained by a book.

This is a great series!

I love this series so much, I got my dad hooked on it. I have listened to the previous books and loved them. This book was a little different because the story is told from two points of view, Rico and his sister, Sylvia. Gah! Rico has a sister and she is as awesome as he is! I truly loved both narrators. Joel Richards can talk to me with that gravely voice through my earphones anytime and I thought Cassandra Alling gave Sylvia the right amount of snarky attitude. I really loved listening to this story. It brought Rico's story to life, like watching a movie in my head. These guys were that good. I sure hope we have more Superego stories in the near future.

Great entry in the series

I enjoyed the double narration pov, and the story twists. Great entry in the series. 🥇

The “Betrayal” is to the fans of the first books

I have loved the series. I was incredibly disappointed to hear the additional reader and that Rico’s voice is different, as well as Dibs (sp). It’s like they’re different characters that I have to learn all over again. Having to grind it out. Please revert back to the original single reader for the final book.