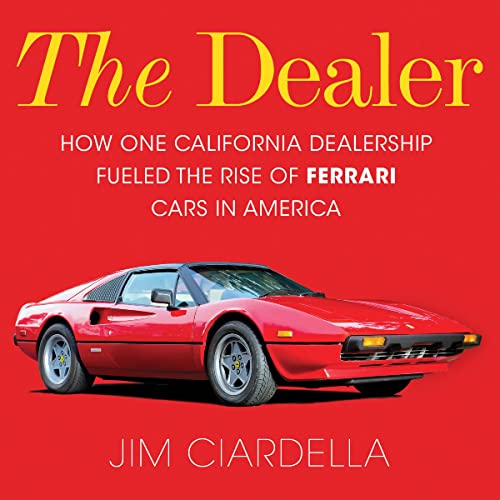 By: Jim Ciardella
Narrated by: Tim Dixon
Try for £0.00

When Ferrari of Los Gatos opened, few people could afford an expensive sports car. In 1976, the average annual income was $12,686, and a new home cost about $48,000. Motorists in California could only buy gas on odd or even-numbered days based on the last digit of their license plate, due to the global oil crisis. Times were tough, and people were hesitant to take chances, especially with a car that cost more than a house. At the same time, Brian Burnett and his friend Richard Rivoir had the idea of starting a Ferrari dealership.

The Dealer is the story of how one dealership, Ferrari of Los Gatos, fueled the rise of the iconic Italian sports car in the U.S. market on its way to becoming the number one Ferrari dealer in North America. Even Enzo Ferrari himself took notice, flying Brian and the other dealers to Italy to show his appreciation for their success. Customers included movie stars, sports celebrities, entertainers, and some with unusual sources of income and a strong desire for a low profile.

What listeners say about The Dealer