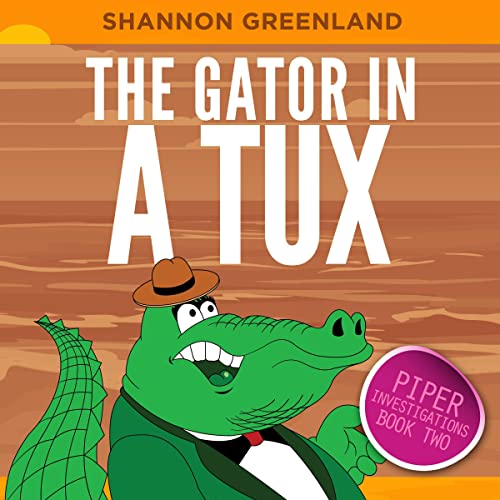 The Gator in a Tux

By: Shannon Greenland
Narrated by: Mary Huff
Try for £0.00

Penny-Ann Piper is back, armed with attitude—not to mention a pea shooter, lockpicks, mini-binoculars, and a flashlight that may or may not have batteries.

This time she’s after Maura Alva, daughter of the local taxidermist, who pranked the island’s oldest, most beloved resident, and caused her to break a leg. Maura took off, and Penny’s going to find her and make her pay!

Staggering knee-deep through the world of preserved animals, Penny-Ann traipses through swamps, creepy houses, and cemeteries, with her pal Diamond De Luca at her side. And this time Rocco Garcia, the flirty local surfer boy, joins in. Because well, he’s always up for a good adventure, and he seems to like finding it around Penny-Ann.

But when threatening notes arrive, someone vandalizes her playhouse, and embalmed animal parts appear on her doorstep, Penny-Ann realizes this is so much bigger than Maura pulling a prank.

With only one true case under her belt but learning fast, Penny’s targeted by the sneakiest opponent she's encountered yet. Can she patch together the puzzle, or will her adversary get away with the biggest heist ever?

What listeners say about The Gator in a Tux