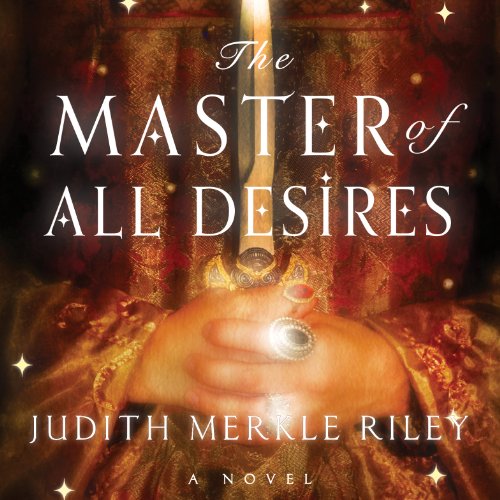 The Master of All Desires

By: Judith Merkle Riley
Narrated by: Hollis McCarthy
Try for £0.00

From the novelist with Antonia Fraser's authenticity and Anne Rice's allure comes another "highly enjoyable romp" (Newsday), with a millennial twist.

In The Oracle Glass and The Serpent Garden, Judith Merkle Riley enchanted listeners with rich, pause-resisting re-creations of eras past, wicked thumbnail sketches of power players, riotous action, delicious mystery and romance, luminous prose, and feisty heroines with a feminist sensibility. The Master of All Desires has it all, with an extra helping of the occult, clad in Riley's hallmark style and wit.

It is 1556 and the queen's astrologer, the prophet Nostradamus has uncovered a secret that could destroy the kingdom of France. The queen, Catherine de Medicis, a dabbler in black magic, has decided to get rid of the king's mistress by seeking out the legendary Undying Head of Menander the Magus, known as the Master of All Desires. But she does not know that evil befalls all those who wish upon this accursed object. And the head, in its coffer, has fallen into the possession of a charming, wryly perceptive but stubborn young woman: Sybille Artaud de la Roche, a bluestocking poet who needs it to obtain all her desires...beauty, genius, and a dashing, intelligent cavalier. The three-way battle that ensues - a prophet who scorns poetry, a woman in love, and a sly and ruthless queen - is set against the rich, detailed tapestry of a nation on the verge of civil war and a lively constellation of famous figures clustered around Nostradamus, seer of the millennium.

What listeners say about The Master of All Desires

Great story, but not so great narration

Where does The Master of All Desires rank among all the audiobooks you’ve listened to so far?

I'd say fairly high. The plot was great, with the twists and interesting characters I've come to expect from JMR. A little history, a little intrigue, a little mystery, and some unredictable romance, it was a good book I was certainly driven to finish.

The wit of the characters. They never let you down in humor, cunning or determination. And they were never fully good or fully bad; they were believable.

Who would you have cast as narrator instead of Hollis McCarthy?

Oh gods, she was awful. I almost gave up in the beginning. She makes poor Sabille sound like a complete airhead in the beginning, and all the men sound ridiculous, but luckily the story kept me going and eventually the narrator toned the every-single-word breathlessness down a bit and it was easier to listen to. If you can just suffer through, I think the story will catch you like it did me and you can listen past the narrator. One small point in her favor is that she didn't butcher the French pronunciations.

Who was the most memorable character of The Master of All Desires and why?

Oh, such a close call here. Nostradamus was fantastic, his familiar was wonderful, but I think it was the Aunt Pauline who stole the show.

This was a great listen, even past the awful narration. Stick with it and by the end I think you will be pleased you did.

Second half was much better than the first.

Would you try another book from Judith Merkle Riley and/or Hollis McCarthy?

Yes to Judith Merkle - No to Hollis McCarthy

Did Hollis McCarthy do a good job differentiating all the characters? How?

Heavens no! Couldn't stand some of the male voices she uses, made them sound like imbeciles!

Almost quit listening about Chapter 3, story line developed way too slowly. It picked up after that thank goodness.

Another great one from Judith Merkle Riley

Despite the bad reviews for performance I decided to try this book and I'm glad I did. It was excellent and the performance was flawless.

A good book ruined by the reader

I have enjoyed listening to every other book by JMR and saved this one for last. But what a disappointment! The reader ruined this book because her in-character voices are really amateurish and her Italian accent abominable and off-putting. I wish she had simply read the book instead of trying to perform it since her normal voice is pleasant enough but she clearly has no gift as a story teller.

In this book, the author switches between three story lines which all are set in France during the reign of Henri II . The main story is about the adventures of Sibille, a feisty young noble woman at a time when women had no rights and whose property was transferred to her husband upon marriage. Another story line is the historical love triangle between King Henri II of France, his wife and the mother of his 10 legitimate children Catherine de Medici, and his mistress and close confidant Diane de Poitiers. Finally, Michele de Notre-Dame, best known as Nostradamus, also tells his tale. Of course, as the novel unfolds, these three story lines intersect.

As with all her novels, JMR uses magic and superstition to heighten the drama. She also uses humor and double entendre to good effect. However, this novel brings historical events much more into the main story than any of her other books. And in so doing, the story becomes rather pedantic at times, and a bit heavy handed.

JMR's other books are a real treat and very well read. If you enjoy historical fiction with a feminist angle and also like a bit of whimsey and magical realism along with the history, you will enjoy listening to her other novels. Many others have reviewed this book favorably, but these reviews are by readers not listeners. To get the most from this novel, perhaps reading the book would be your best bet.

Would you consider the audio edition of The Master of All Desires to be better than the print version?

Not at all. In fact, I almost gave up because the narrator came across as a theater school drop-out. Too dramatic and airy and lots of heavy intakes of breath. I found her immensely trying at the beginning of the book, almost gave up. But, I managed to get past my irritation and could enjoy the story and its many fascinating twists and turns. Narration got better at around 30%. Or, I got used to it.

I felt like I was moved back in time and really immersed in Renaissance France. The book stays true to actual historical events. The characters - even supporting cast - are varied and interesting personalities. One thing though: a great many of them think they, and only they, deserve good things more than others.

How did the narrator detract from the book?

Maybe because the book is very rich, interspersing various viewpoints and extracts of letters, it is difficult to understand who is talking in the beginning. If you are reading, this is obviously not a problem. Re. narration - see above. One point in narrator's favour is that her pronunciation of French names and places is very good. The Italian accent of the queen is also well done.

If you could rename The Master of All Desires, what would you call it?

Why would I? The title is perfect!

I love aunt Pauline. Would really like a tante like her. Sibille is very young and earnest but she grows and matures and shows grit and stamina towards the end.
Menander is a truly evil little talking head, but extremely entertaining.