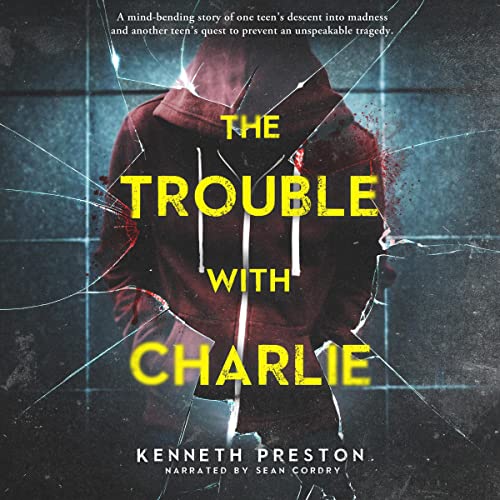 The Trouble with Charlie

By: Kenneth Preston
Narrated by: Sean "DrC" Cordry
Try for £0.00

A mind-bending story of one teen’s descent into madness and another teen’s quest to prevent an unspeakable tragedy.

Fifteen-year-old Charlie Simpson is a ticking time bomb. If somebody doesn’t stop him, he is going to explode. Fellow student Sam Caffey has never met Charlie, but he’s been watching him. He knows that Charlie is dangerous, and he knows that if he doesn’t act fast, people are going to die.

But the more Sam learns about the enigmatic Charlie, the more he begins to question his own sanity. He wants to stop Charlie. He wants to tell somebody that Charlie has killed and is going to kill again. But he can’t. Something in his head won’t let him. Is Charlie controlling Sam’s thoughts? Or is Sam losing his mind?

Sam has seen Charlie kill, but nothing can prepare him for what Charlie is about to do next. Charlie wants revenge. He wants to kill everybody who has ever wronged him. Can Sam stop Charlie? Or will he be forced to join him?

What listeners say about The Trouble with Charlie

I’ve recently gotten into audiobooks to make my commute more enjoyable, and The Trouble With Charlie did just that. I was impressed with the great storytelling by the author, filled with twists and surprises, and a nice choice of reader to bring it to life. An overall great listening experience.

This was a mind bending story of two teenage boys trying to come to term as to who/what they are.

Enjoyed the performance and the story and recommended to friends already!

Overall a fantastic production that I would highly recommend 5stars

A Disturbing Spiral of the Mind

This book and storyline are well written with the realness of mental illness. The book can be quite descriptive and disturbing but well worth the listen. Things may start off slow but when it picks up it doesn't let you go for a minute while it takes you on an up and down ride in the life of someone with mental health issues. I highly recommend this book to anyone who loves real suspense. I received this book for free upon my request but it has no bearing on my review that I am voluntarily leaving of my own volition.

I can't believe I listened to this <i>whole</i> thing!