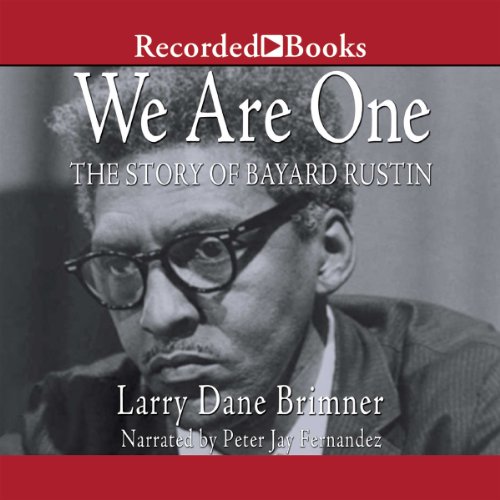 You may never have heard of him, but you've probably heard of the many people civil rights activist Bayard Rustin influenced. He was a mentor to Dr. Martin Luther King, Jr., and refused to move to the back of the bus many years before Rosa Parks did.

The son of a freed slave, Bayard Rustin grew up during the peak of the Jim Crow laws, which segregated Blacks and Whites. His own family was fairly well-off and hosted distinguished guests like Mary McLeod Bethune, but Bayard could not stand to hear the stories of Blacks elsewhere who were treated with disrespect because of the color of their skin. He made it his life mission to change these ideas, and as a young man he began traveling the United States as an activist.

Larry Dane Brimmer, a prolific and award-winning author of nonfiction for children, illuminates the story of this little-known but influential civil rights leader.

What listeners say about We Are One

"The intellectual engineer of the Civil Rights Movement". What an amazing life he lived! I highly recommend this book!

Perhaps details were chopped due to time limitations, but a great deal was missing from Rustin's fascinating life. The fact that his homosexuality was mentioned as a small afterthought is my biggest objection. This fact of Rustin's life created perhaps the biggest obstacles for him to overcome. Homophobia from both inside and outside the civil rights movement is what forced Rustin to the background. Known as the "intellectual engineer of the civil rights movement," he still found ways to succeed in spite of every possible obstacle in his way. And the most beautiful thing about him is he remained true to himself by not denying who he was. He refused to allow his sexual identity be a source of shame. The crushing homophobia of those decades caused many gay people to live in shame, so they stayed in the closet, denied their true selves and often conformed by taking heterosexual spouses and having children as a cover. In those days, it was illegal to be gay and if caught, it meant jail time and being labeled a sexual deviant. So, the fact that Rustin was openly gay in addition to all the other factors preventing him from enjoying equality is a part of his story that, in my opinion, should be front and center. It was not Rustin's humility and Quaker beliefs that drove him into the background. Homophobia is was nearly got him written out of the history books.

loved learning of this behind the scenes figure in the Civil Rights movement. I wanted more though by the end. if the goal was to teach and instill a want to learn more than well done.