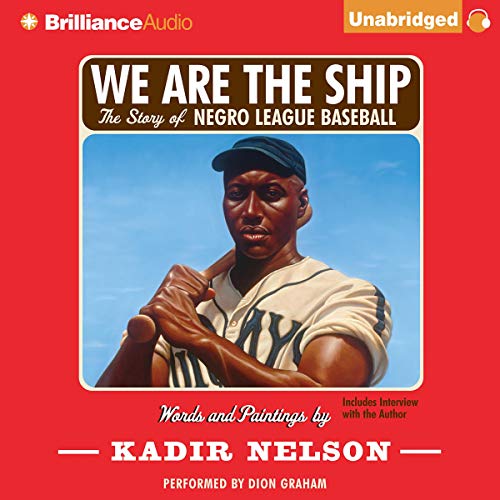 We Are the Ship

By: Kadir Nelson
Narrated by: Dion Graham
Try for £0.00

"We are the ship; all else the sea." - Rube Foster, founder of the Negro National League

The story of Negro League baseball is the story of gifted athletes and determined owners; of racial discrimination and international sportsmanship; of fortunes won and lost; of triumphs and defeats on and off the field. It is a perfect mirror for the social and political history of black America in the first half of the 20th century. But most of all, the story of the Negro Leagues is about hundreds of unsung heroes who overcame segregation, hatred, terrible conditions, and low pay to do the one thing they loved more than anything else in the world: play ball.

Using an "Everyman" player as his narrator, Kadir Nelson tells the story of Negro League baseball from its beginnings in the 1920s through its decline after Jackie Robinson crossed over to the majors in 1947. The voice is so authentic, you will feel as if you are sitting on dusty bleachers listening intently to the memories of a man who has known the great ballplayers of that time and shared their experiences. But what makes this book so outstanding are the dozens of full-page and double-page oil paintings - breathtaking in their perspectives, rich in emotion, and created with understanding and affection for these lost heroes of our national game.

We Are the Ship is a tour de force for baseball lovers of all ages.

What listeners say about We Are the Ship

at the Negro League. From its humble beginnings to the end of it in 1960. The author leaves no one out. All the league stars are in this book. A quick easy read while travelling.