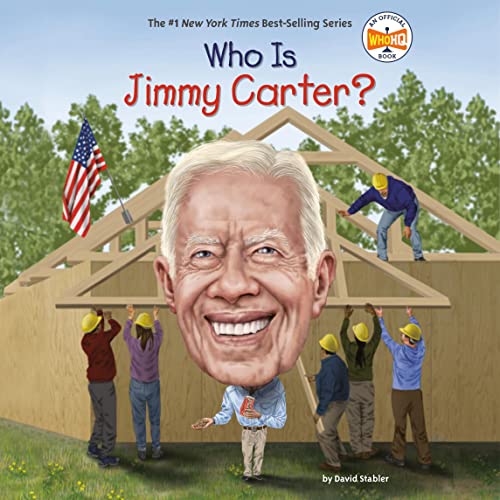 Who Is Jimmy Carter?

By: David Stabler,Who HQ
Narrated by: Amanda Damron
Try for £0.00

How did a peanut farmer from a small town in Georgia become the 39th president of the United States? Find out in this addition to the number one New York Times best-selling Who Was? series!

Everyone was rather surprised when small-town farmer Jimmy Carter first announced that he’d be running for president in 1976. When Jimmy told his mother, she replied, “President of what?” But this former naval officer and governor of Georgia was ready for the role.

Jimmy Carter went on to become one of America’s most beloved political figures thanks to his honesty, strong faith, and compassion. Even today, Jimmy Carter is still dedicated to helping Americans through his extensive work as a philanthropist. He and his wife, Rosalynn, volunteer with Habitat for Humanity, building houses for the less fortunate and inspiring others to a life of service.

Who Is Jimmy Carter? details the entire life of Jimmy Carter, beginning with his 1924 birth in Plains, Georgia. Listeners will learn about his life as a peanut farmer, a Sunday school teacher, a president, a Nobel Prize winner, and more.

What listeners say about Who Is Jimmy Carter?