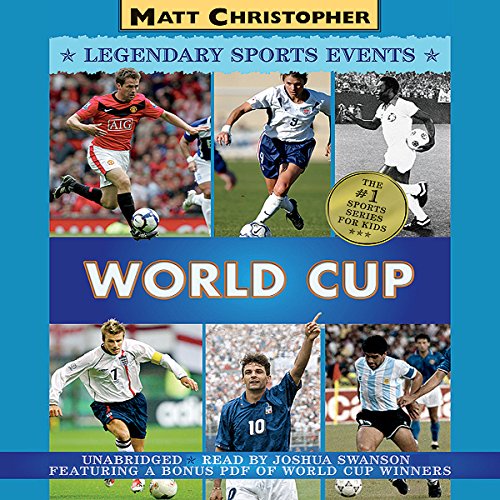 By: Matt Christopher
Narrated by: Joshua Swanson
Try for £0.00

Soccer. No other sport in the world captivates a bigger audience -- and no other competition electrifies its fans like the World Cup. Now, just in time for the next World Cup competition, comes a book just for kids, jam-packed with information about each and every World Cup ever played.

Want to know who was behind the biggest surprise defeat of the 1950 tournament? It's in here. Curious about what happened to the Jules Rimet trophy when it was in England? Listen to the chapter on World Cup 1966. Wondering what the term Total Football means? You'll find the answer here - along with much, much more, including a bonus chapter on the Women's World Cup and lists of winners, runners-up, and scores of past Cups. And because it all comes from Matt Christopher, young listeners know they're getting the best sports writing on audio.

What listeners say about World Cup

Entertaining, especially for young ones

Entertaining, informative summary of World Cup history. The nine and under set (including both of my kids) will really love it. I, too, enjoyed it, but because both the writing style and the voice performance are aimed at a young audience, it can be a little difficult to listen to at times. For the intended audience, it's a goal. Well done.