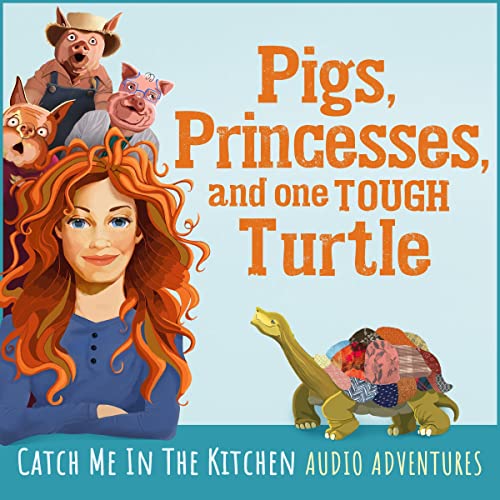 Pigs, Princesses, and One Tough Turtle

Welcome friends! Bienvenue mes amis! Join us around the kitchen table for adventure and music.

Canadian storytellers Ginette Mohr and Stephen LaFrenie reimagine three classic tales with delightful characters and surprising twists. Professor Pineapple and the Pickle Peppers Band join Stephen and Ginette in the excitement and fun. Plus, there’s a chance to discover new French words as the stories unfold!

Two brother pigs come to appreciate their little sister’s ingenuity when she outsmarts “the most handsome, most daring, most petrifyingly feared wolf in all the province of Ontario”.

Story 2: "The Princess and the Pea"

A lonely prince opens his castle door to find a muddy girl standing there, soaked from head to foot. His mother, the queen, takes one look at the stranger, who claims to be royalty, and says, “Where are your jewels and crown? And goodness gracious, are you wearing pants?! Les pantalons?” In this tale, appearances are not always what they seem.

Story 3: "The Tortoise and the Hare"

“What? You want to race me? I’m the fastest thing around here!”

The hare kicked up a trail of dust. The tortoise took a slow, determined step. So began an epic race in a small Canadian town that found itself trending around the world.

What listeners say about Pigs, Princesses, and One Tough Turtle