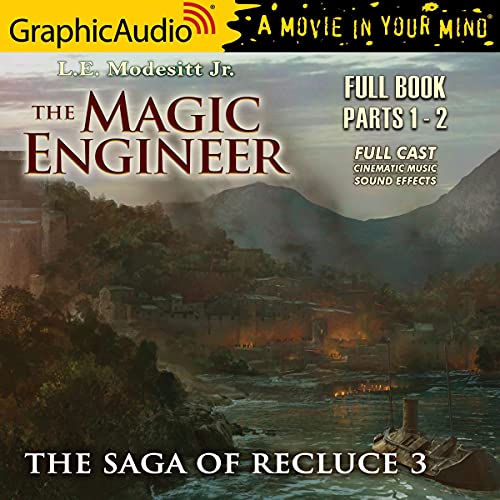 In L. E. Modesitt, Jr.'s The Magic Engineer, Dorrin, a young scion of Order magicians, is interested in forbidden knowledge - the working of machines.

He is the Leonardo da Vinci of his age, but his insights violate the rules of the Order magic of Recluce, and in order to pursue his invention he must go into exile - in the lands of Chaos.

Tortured by the knowledge that to preserve Order he must create new devices for war, Dorrin stands between Recluce and the forces of the Chaos that seek to destroy it.

"An intriguing fantasy in a fascinating world." (Robert Jordan, New York Times best-selling author of The Wheel of Time® series)

What listeners say about The Magic Engineer [Dramatized Adaptation]

Abridged, but not to bad

I returned this once I realised it’s a pretty bad version of the story. I’m guessing to cut the length they decided to cut entire sections of the book. Sadly some of those sections cut were very much needed for character introductions and developments.

As a result you get a disjointed story, which is a huge shame as the dramatisation is really good. If you’ve never read the books, then I’d say go ahead, it’ll be a fun listen. However if your like me and are a huge fan of the original novels this will leave you feeling very let down